PhanArt at MockShow (with Jiggs gear!) 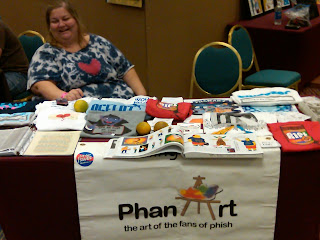 Many thanks to PhanArt selling my Miami Vice themed NYE shirts at the PhanArt booth at Miami's Mock Show.  Pete said a lot of folks were commenting and snatching up the shirts today. If you are looking for one and couldn't make it to Miami, check out the links on the right.

Congrats are in order for Stout, Isadora, Lamb, and Welker for the poster wins.
Posted by Jiggs at 2:48 PM No comments:

By definition Lot Art, be it a shirt, poster, or sticker, falls into the category of Pop Art. According to the Artchive "The term first appeared in Britain during the 1950s and referred to the interest of a number of artists in the images of mass media, advertising, comics and consumer products."

The literal definition through Merriam-Webster is as follows:

: art in which commonplace objects (as road signs, hamburgers, comic strips, or soup cans) are used as subject matter and are often physically incorporated in the work

Of course, everyone thinks of Andy Warhol first. There could probably be no more recognizable symbol of the Pop Art movement than the Campbell's Soup Can. However, there is a long list of artists that are included in this movement, like Roy Lichtenstein, David Hockney, and Jasper Johns that aren't as recognizable. (If you have purchased lot art in the last decade and haven't heard of these artists, look them up.)

Art, like anything else, has a cutting edge of ideas that eventually filters down to others who want to try similar ideas. From parodies of different kinds of art techniques, to company logos would have been a logical transition.

The earliest example I was able to find of this was a poster for a fraternity at an antiques store a few months ago. It was a Budweiser Parody for a school dance, or function. Unfortunately I have deleted the picture, but the date on the poster was from the early 60's. From that point, it's easy to see the jump to T Shirts and Stickers for touring bands like the Grateful Dead, and eventually the Phish parking lot.

The legality of the more recent items has been the source of much debate, both constructive and ridiculous. You may remember Knighthood finally won after a court ruling determined:

"...it is just as likely that many Phish fans are sophisticated enough to understand the difference between plaintiffs' items, which clearly display an official, registered 'Phish' logo," stated Murtha, "and the defendants items, which uniformly and prominently incorporate artwork associated with other, non-Phish products."

I don't claim to be an expert Art Historian, or even serious art collector, but the history of the items we all love so much is a very interesting one indeed.

These last two designs for Heady Threads round out the designs commissioned for early next year. The final shirt and ink colors are being selected, and these are expected to be available next month. 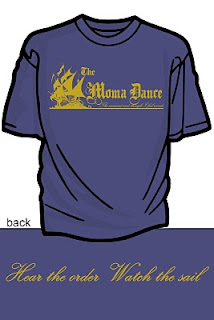 This one parodies Pirate Bay and features two lyrics from the song. The front subtext reads "the moment ends though I feel winds". The back reads "Hear the order Watch the sail". The graphics are, of course, approximate to the colors chosen, but the final prints for the Moma Dance Shirts should be bright mustard yellow on a slate/stone blue shirt. The sail features Fishman's Donut Dress. 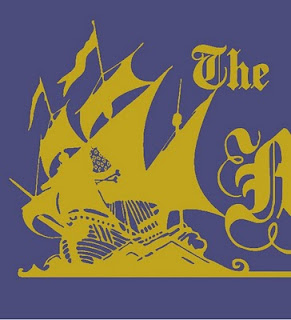 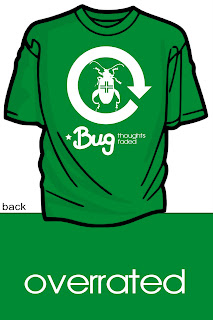 This one features a white on kelly green print based on a popular clothing manufacturer...which I understand is overrated. The subtext on this one reads "thoughts faded". A leaf beatle replaces what was once a tree in the center. The larger version is a kelly on white to show the detail. Congrats to Heady Threads for some great concepts to work from, and good luck in 2010! 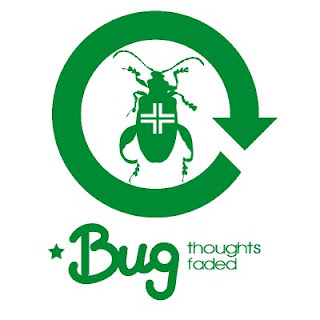 For information on getting your hands on one of these, please contact HeadyThreads at  theheadythreads@hotmail.com.
Posted by Jiggs at 12:53 PM 1 comment:

When trying to make an avatar for someone of the screaming girl from this ad...it occurred to me that they could be having a little more fun...while they're young.
Posted by Jiggs at 8:36 AM 1 comment:

These are the next two in line for Heady Threads. The ideas came from Heady Threads, and the art and layout was done by myself. For information on these designs and when they will be available, please contact headythreads@hotmail.com

Look for these to start printing sometime next month.

So, I was following Twitter and watching the setlist roll in for MSG Night 3 when at about the time the encore started, PhanArt texts me the idea for this. After some ideas get bounced around, we settled on this graphic. This will be a black and white vinyl sticker. The square measures 4.25 inches, and these are the durable vinyl that the Kuroda stickers were printed on.

Since these are brand new, they have not yet been added to the PhanArt site. A paypal link will be added to the store on their site very soon, and you can look for these in Miami this year. 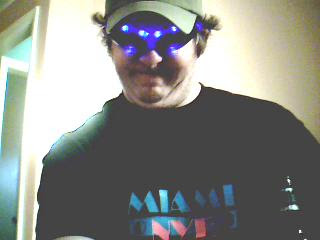 Vending, Snowing, and Naked in Charlottesville

Getting there proved to be half the battle. At least three or four hours of my drive was through heavy snow. It reminded me of going to the Boston show (12-2-03) only more snow, and a shorter drive. The snow continued to fall until right before the show. 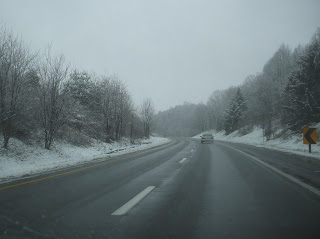 If I had stayed up Friday night planning how I would park, I still wouldn't have landed a better spot than where I ended up Saturday night. I was smack in the middle of shakedown. JPJ garage didn't open until later when the other lots began filling up, so it looked like getting the parking pass definitely paid off. Trying to vend mobile with snow coming down would have been a neat trick. It was great to be where the other shirt and food vendors were set up. The icing guy was parked right down from me, and he was advertising his wares with...get this...a green laser pointer. Yes, that was probably him inside that night. At least it didn't last very long. 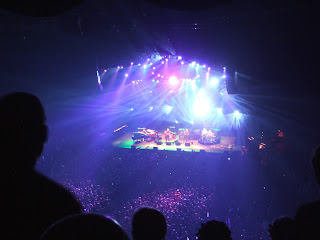 One of the greatest joys was meeting all the people from the different message boards and twitter. The conversations would always start the same: "Hey!...are you...Jiggs?.....". Thanks to everyone who came up and introduced themselves, and thanks for the comments about the shirts and stickers. 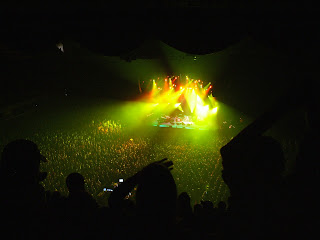 The show will probably end up being one of my favorites, specifically for the Tweezer > Light > Piper > Free. That is why I see Phish. There were some awesome type II moments in there that took the room for a big ride. Kuroda upped the ante when connecting with and mirroring the energy onstage. It was one of my favorite band/light jams that I have seen. It pushed on at times taking a blistering pace, but it all seemed purposeful and natural, as if it were meant to happen that way. Pure hose. And after the Yamar incident, the Antelope featured the "Run Like a Naked Guy" lyrics, making for more asterisks when the show was on paper. I love antics. It appeared, by the way, that the guy never intended to touch the band, well maybe just a hug...and just run naked on stage. Sorry, no pictures of that, but I am sure they are out there. At this point the whole show seemed to go up a notch. 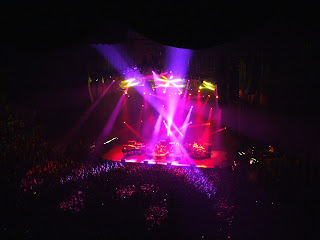 I know most considered this another repeat show, but I'm glad they had plenty of time to practice these on tour, so I got some of the best versions. And, thanks naked guy for giving the whole room a kick in the pants. 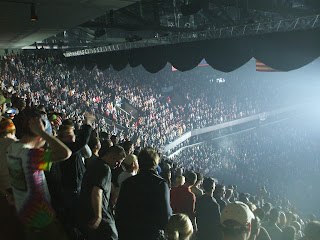 The community vibe was strong and I really enjoyed my time in the lot both before and after the show. there were a couple of weird moments, one being a balloon vendor tried to set up/adjust his tank directly in front of me. Literally. I said...well, let's just say I asked him to move. Then balloon vendors popped up everywhere. And when some one almost got arrested directly behind me, it was time to pack up and go. A small blemish on an otherwise flawless evening.

I can't think of a better place for Phish to end the tour than in a small college town in a venue roughly the size of Hampton. Say what you will about a college town, but those kids were getting down, and the band seemed to give it right back.

I get asked this all the time. If you have an idea and you want to get it to a shirt, I may be able to help. As long as the design doesn't violate certain rules that I operate by:
I charge $25 an hour to design, and I can usually do most designs in an hour. This includes tweaking the design to your specifications or consultation about the design. If it's more complex and it goes longer than one hour, I will explain that beforehand. I also will request one (1) shirt if it's a design I really like. I will be brutally honest whether I think your idea will or won't work, and whether it has a good chance of selling. I will discuss this with you before I accept any payment. I will expect payment after the work is completed. When completed I will supply you with the jpegs, pngs, and pdfs of the designs and it is then yours to keep, in case you want to do it again down the road. Donating a shirt to PhanArt for sale to benefit MockingBird Foundation is also recommended. PhanArt will list your items for free.

Need help finding a printer? I can help with that too, as I have worked with a couple of people. Depending on the scope of your project I can connect you with the right people.

I can be reached at jiggslikesphish@gmail.com.
Posted by Jiggs at 11:02 AM 1 comment:

I was commissioned to do a few designs for headythreads, the first being an updated Coke parody featuring Col. Forbins. The shirts will be printed on Gildan 100% cotton red shirts. The back of the shirt reads "I know why you've come here."

I will not be selling these shirts, but since I have a hand in creating them, the shirts will be featured here when they are finished. This design is in production now, and will be on the lot in Miami. For information about these shirts or to find out about getting one before Miami, please contact: theheadythreads@hotmail.com.
Posted by Jiggs at 3:27 PM 2 comments:

So I just got an email from Dan about the copied laser pointer design. He apologized and will be removing it by this evening. Big thanks to everyone who brought this to my attention through twitter, especially @strangedesign.

On a side note, if there is still a demand for my original Kuroda shirts, please send me an email. I may consider re-running this one.
Posted by Jiggs at 12:01 PM No comments:

Through the wonder that is Twitter I discovered that my Laser Pointer shirts and stickers were copied recently and used without my permission on this fairly new website: http://www.phishtshirts.com/new-products.php. You may also notice that they have stolen PhanArt's Twitter/Tweezer design, as well as an old Lawnboy design I did over the summer.

PhanArt and I are in contact with him and are awaiting a response.
Posted by Jiggs at 9:14 AM No comments: