A Word About the Steal Your Face

A little while back, I posted about Phish "no-no" designs, variations on the Phish logo, or the blatant use of the name or likenesses. Because of what I see as the sense of entitlement within the artist community, I got a lot of flak for that post. I still will stand behind it, and encourage others to do the same. However, in the end, people are going to do what they are going to do.

The one thing I keep hearing from young and older fans alike, is that the Steal Your Face is fair game. From my point of view since the image has appeared on album covers, it was no longer just a symbol that Owsley and Bob Thomas created to tell the band's gear apart from other gear. It was a brand. Similar to the other album covers and art created by Kelly/Mouse, these graphics became lasting iconic symbols for the
band. If it's not legal, or "ok" to use Phish's logo, why would any other band's logo be different?

We are not talking about corporate logo mash-up's here. Consider Banksy's quote about advertiser's who do not give you a choice as to whether you view their ads.:


Any advert you see in a public space that gives you no choice whether you see it or not is yours to take, re-arrange and re-use. You can do whatever you like with it. Asking for permission is like asking to keep a rock someone just threw at your head.

First of all, let's not get into a debate about that quote being plagiarized from Sean Tejaratchi's Crap Hound magazine piece in 1999. Instead, let's examine why this is a such an inspirational piece of text, and why it applies here. Using Tide to represent the song Glide is not the same as just taking the Phish logo and making it say whatever you want. There is actually a court ruling that says this type of design does not infringe on Phish's intellectual property.  (Phish, Inc. v. Knighthood) Altering Phish's actual logo is. The same is true for a Steal Your Face. Whether it be a sports team, an EDM logo, or a Wu-Tang reference (Even if you ignore the fact Jerry did not consider rap to be music.), it is not yours to re-arrange. It is not an advertisement. You have a choice.

This follow up post was inspired by a conversation in a FaceBook group with a guy I met named Bryan. Bryan remembered a page from The Illustrated Trip biography that referred to this very situation. He was diligent and kind enough to type out the entire Robert Hunter quote which flies in the face of the "we can do whatever we want with these logos" conventional wisdom that exists today.


In the parking lots & fringes of gigs, an artisan culture sprouted up naturally, & just as naturally alerted the business world at large of the profits to be gained from rock tie-ins. In light of this annoying knowledge, our lawyers decided to shut down the artisans en toto because of the influx of true counterfeiters, merchandise companies who dumped great quantities of bad tie-dyes in our lot, due to our laissez-faire non-policy. The counterfeiters were overcome & the artisans responded by continuing to create the forms sans logo or else using the trademarks surreptitiously. But, the commercial dogs were unleashed. They're hard to train & don't differentiate. Trying to stop corporate commercialism resulted in the evolution of new product by artisans that was reminiscent of the feel if not the logocentricity of what was already in creation. Generic. That particular bad decision didn't stymie the growth of the art, only it's GD specificity. W/o apology, that's how it went down. You see how it is. Conclusions to which we were led by the very system we tried to cut looses from. - Robert Hunter

The baby was thrown out with the bathwater because there was no way to stop just the counterfeiters. Or, at least that's how I interpret this. This blog post is an attempt at clarity. If you really do care, and you really want to be original, you are going to have to take a risk of creating something nobody has seen before. Trust me, it's an extremely difficult thing to do. If I didn't have thick skin, I would not be an artist. For every 1 person that likes what you do, there are 10 people behind him that think you suck. I see this as a huge part of the reason that the SYF is so often butchered. It's easy, recognizable, and it's likely that someone will buy it. No one wants to take any risks.

So, you can flame me for drawing my own line if you like. Everyone has an opinion. But these symbols hold sacredness to me. So, I won't be the one printing SYF's or Terrapins.

Let these images inspire you! Create something we've never seen. There are a lot of artists doing this right now, and they are doing it extremely well. Be selective about what you buy in the lot, collectors.

Check out AJ Masthay or Isadora Bullock or maybe check out a poster show the next time one is scheduled when you are on tour.

There is amazing art everywhere if you look. 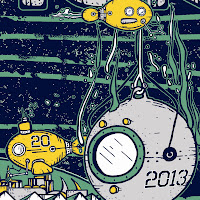 It's that time again! These process posts have been getting positive feedback when I see folks in the lot, so I figured I would keep it going with the two posters I have planned for the fall. Journey to Hampton has been in my head for a little over a year now. Sometimes an idea has to wait until they play a venue again. Keep checking this post for photo updates of the printing process. Remember when ink hits paper, the pre-order ends.

I started with the venue itself, and decided to make one for each night.
The little robot fish (what I them) came later. Theme From the Bottom was the song I held in my head for the inspiration. 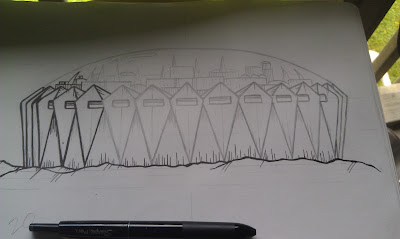 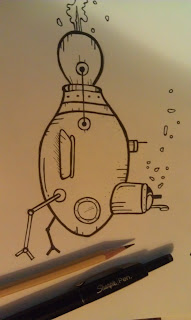 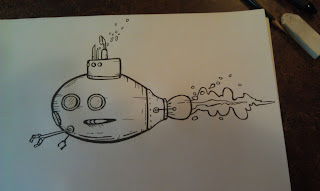 The bathysphere was something I thought of during the drawing process. I wanted to combine elements of the past and the future. You can see on this early drawing where I changed my mind about where the word Hampton would appear. 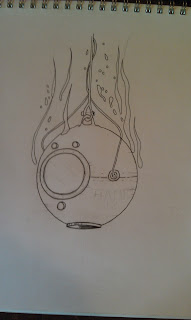 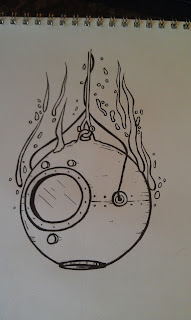 Here's where the layers started to come together. 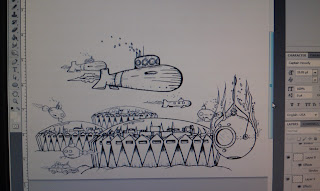 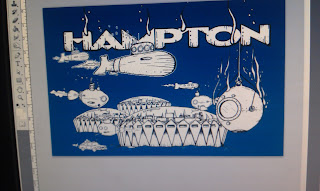 Ink selections have been made. A little mixing will happen. Check out that silver! 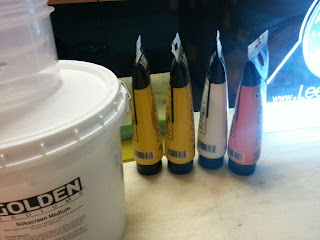 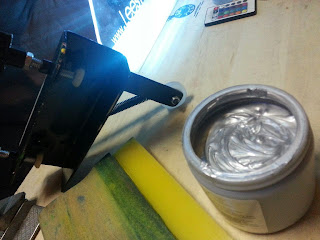 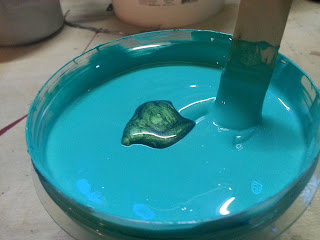 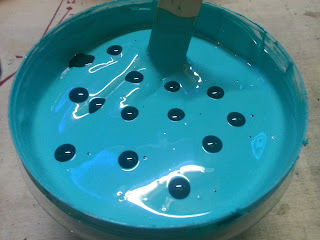 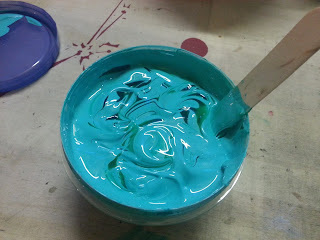 The paper is here! 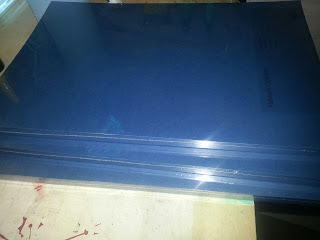 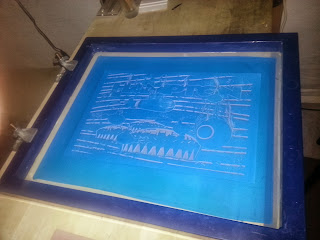 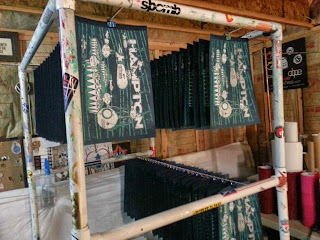 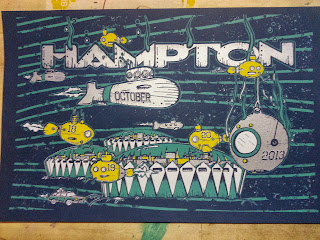 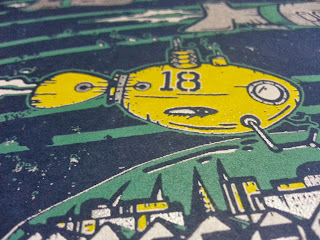 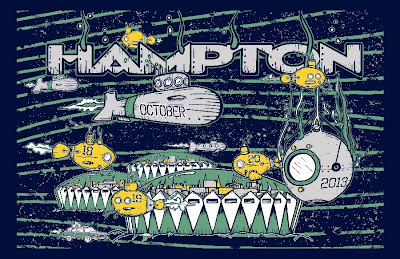 Featuring a Theme theme, this poster will be sized at 11 x 17, a bit larger than my 2012 poster efforts. The image will be screen printed on a Myrtle Blueberry paper (Flavours Gourmet) using Iridescent Silver (Fine) by Golden Acrylics, White, Yellow, and Sea-foam Green. Everything that appears as grey in the graphic will be printed with Metallic Silver. I am really looking forward to seeing how this turns out. Most likely there will be some variants available, but I am keeping those details under wraps for the time being.

In order to help offset the cost of this run, I am opening these up for a pre-order period. There will be 30 of these available for pre-order at $20 shipped. They will be $20 even in the lot. The pre-order will stay open until ink hits paper, or until the 30 slots fill up, whichever comes first. You should receive your poster before Hampton, so you won't even have to worry about carrying it around. After this period, you won't be able to get them online until after Fall Tour. This run will be capped at 100, so grab one while you can! This is also your chance to select a poster number before anyone else does. Scroll down to order yours! Posters ship in a 3 inch tube, wrapped in craft paper with delivery confirmation.