I Can't Describe the Feeling When...

Most of us know what it's like to score Lottery tickets. Some of us even remember the feeling of scoring Phish Tickets By Mail (PTBM) after you decorated your envelope and had the request carefully prepared and mailed out. Getting your tickets back in the mail is always a good feeling. Then, there's the feeling of anticipation when driving to the show, and of course the feeling you get right when the lights go down.

Another feeling a lot of us can relate to is getting shut out. This happened to many during the Hampton runs in 02 and 09. Having the time, money and willingness to get the tickets didn't matter...there were not enough to go around. And that was that.

Perhaps more heartbreaking than getting shut out, is sitting one out. Whatever the reason, you know you can't go. There have been countless shows where this has applied to me. However, this is the first time in my years of being a fan that I will ever have to sit out a run knowing that almost every friend I know will be there. It's truly a bittersweet feeling knowing that I will not be there to share in the fun, but I wish the best shows possible for those folks. I know everyone going is deserving of a good time. Enjoy those Charleston shows, folks...they are bound to get down.

This year I will watch Fall Tour unfold from the couch and hope there's a Holiday Run announcement. Though, that is beginning to look less likely.

No more Whalecallers are available for pre-order. If you missed this round, be watching the blog for the Whalecallers stickers due to arrive very soon. I'm sorry I cannot offer these for free as many have requested. They are 1 for $3 and 2 for $5 with free shipping.
Posted by Jiggs at 12:01 PM No comments:

You spoke, and I listened.

The popular Hartford Whalecaller design is back up for pre-order. There have been so many requests for this item that I had to make it available one more time. This pre-order will only be up for a limited time. No more orders will be taken after August 27th, 2010. Please read carefully before placing your order. 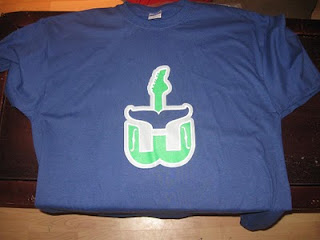 The design is printed on a 100% cotton Gildan Ultra. For information on the shirts I use and sizing, please click here. The shirt color is Metro Blue and the design is a three color front print. If for some reason Metro Blue is not available, Navy Blue will be used instead. I will not print these on custom garments, but I will have ladies and hoodies available for pre-order. After pre-order closes (8-27) the shirts will be ordered, printed, and shipped to me. This could take a couple of weeks, so your shirt may not arrive until mid September. I constantly update the blog and twitter to keep folks updated on the order status.


To reserve your shirt now, click here.
Pre-Order is closed.
Posted by Jiggs at 12:07 PM No comments:

Here are some more videos from the Deer Creek run this year. For more and the original post click here.

Back at the Creek

Deer Creek remains one of my favorite venues for many reasons. Vending-friendly, nearby campgrounds, and great venue staff are some of the things that make it just a little more special. This year I was lucky enough to have an EZ-Up with me and get parking close to shakedown on both nights. This makes vending and relaxing a lot easier. Extremely high temperatures made the shade a welcome addition. My wife and I were using this run as a celebration of 10 years of marriage, plus she had recently had a birthday. We were looking forward to a great set of shows. We arrived early on both Thursday and Friday, so we knew we'd be spending a good amount of time in the sun. Sunscreen and water was a must. 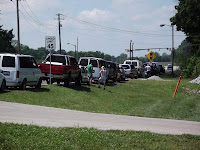 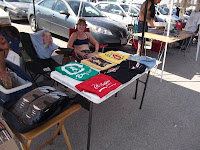 On Thursday, the heat was the worst. We were so early that we had to drive from gate to gate and wait to see which one opened first. We tried to park out of the way with a line of other cars peacefully waiting for the gates to open, but were asked to leave by the Sheriff. We even talked to some Live Nation staff who confirmed what we had heard about the lots opening earlier in the day, but they would not open the gates any earlier. We got in just after 3pm.  Shakedown seemed to take a while to get busy. We met a lot of folks, but missed a few connections, too. I ran into Art from theheadythreads@hotmail.com vending some designs I made for him, and offering up some apple moonshine. After some meet-ups and some beverages, we headed inside. 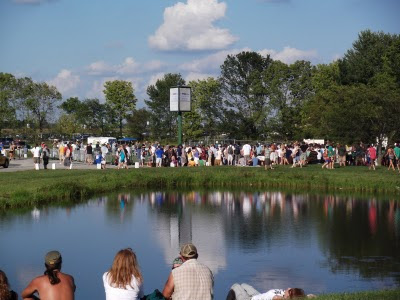 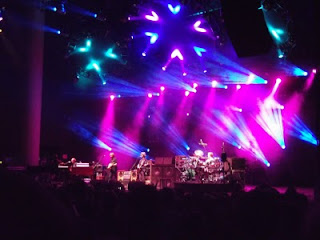 There were a lot of highlights throughout what many I heard call a 'safe' first set. The Cars, Trucks, & Buses and Wolfman's were very strong versions, and the TTE was set at a nice blistering pace to end the first set. Second set brought a lot of transitions including a great spacey Drowned Jam, an amazing Jibboo>Gin transition that brought big cheers from the crowd, and a rare Buffalo Bill. That night also saw my favorite Melt since the return, unfinished and segueing into Dog Faced Boy. As if saving the best for last, Trey brought out the megaphone for a Fee>NO2>Kung>Fire encore. 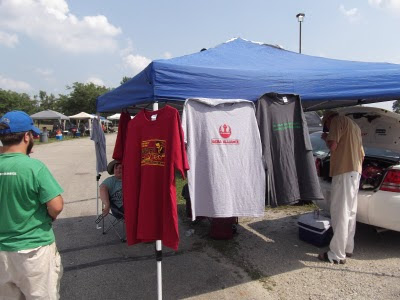 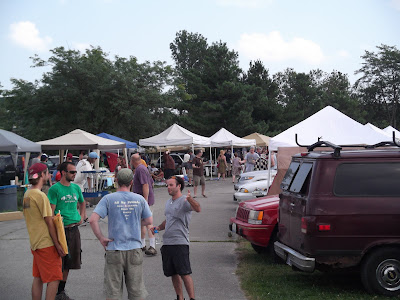 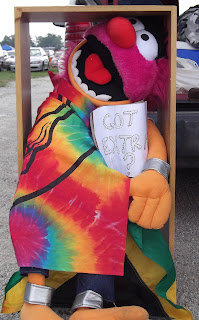 Friday saw a slight break in the heat and some overcast skies. Again, we arrived early and got the same prime spot at the top of Shakedown. The lots filled up fast, and everything seemed to come to us. I was pretty busy with the shirts at this point, so I never got a chance to leave the site. We had some great folks around us, including the guys with the Animal Muppet. I hope Animal found his extra. It was great meeting everyone on Friday that came out including the folks from Reality-Tour.com,  OhKeePa.com, the family from Seattle, and my friends from Twitter. I wish I could mention everyone by name...but you know how that goes. 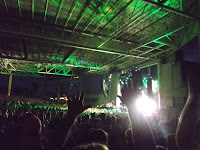 Friday's first set had a number of worthy mentions including the return of Walls of the Cave, my first Curtis Loew, and a strong Possum>Wilson set closer. The second set Maze is one of my favorite versions. If you have not listened to it yet, Page is out of control. I was also blown away by the Meatstick>Mango transition. I never saw Mango coming, and it flowed perfectly into the Fluffhead>Julius.

Even though we weren't heading to Alpine Valley, I appreciated the well played Contact>Slave encore as a nod to traffic heading out in all the various directions from whence it came. Our fate in traffic was not the best, as we were involved in a crash on the way out of the venue that night.. We are all ok, but it will make for a memorable Creek run.

Watch the blog for more videos from Deer Creek.
Posted by Jiggs at 8:00 AM 2 comments:

As some of you know, I was involved in a collision leaving Deer Creek after the second night. Another driver pulled in front of us, totaling the rental car I was driving. I consider everyone in the car very lucky, as this could have been much worse. I am not going to go into detail, as there have been a couple of unresolved complications.

The purpose of this post is an open thank you to those who helped more than  they could possibly know. A vehicle behind the driver who pulled-out stayed for the duration of the accident clean-up to speak to the officer in charge of the scene. Thank you. You gave your names, and made sure the officer knew we were not at fault. Only when we had a ride and you made sure we were ok did you leave.

To the other two drivers who stopped and asked if there was anything they could do, thank you. We were ok at that point, but you didn't have to stop after the show at all...but you chose to.

To the local resident who gave us a ride back to the hotel...thank you. The world needs more people like you.
Posted by Jiggs at 1:36 PM 3 comments:

The Planets Align for Deer Creek...Literally

Among the many forces coinciding on a traditionally great run for Phish is the Perseid meteor shower, which takes place every August. What makes it even more unusual is that Venus, Saturn, Mars and the crescent Moon will appear in the sky within 10 degrees of each other.

Although the 12th will have a lot to view, the best time to see the most of them would be starting close to midnight on Friday the 13th. Those of you staying onsite at the venue are in for quite a show.

Looking northeast around midnight on August 12th-13th. The red dot is the Perseid radiant. Although Perseid meteors can appear in any part of the sky, all of their tails will point back to the radiant. - from science.nasa.gov
Posted by Jiggs at 8:00 AM No comments:

Load-in and Soundcheck in Telluride

Thanks very much to Damstrange of Phantasy Tour for posting these great pictures and video! I hope everyone is having fun in Colorado! 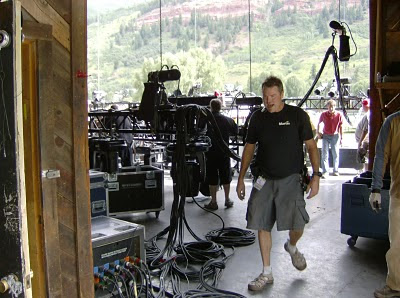 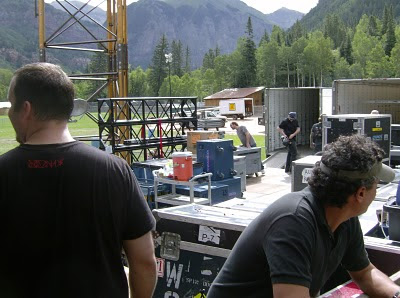 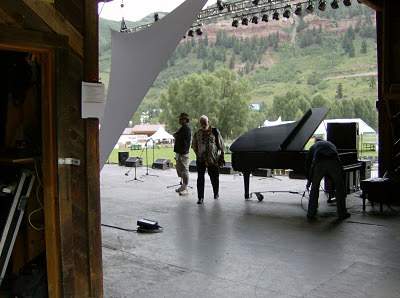 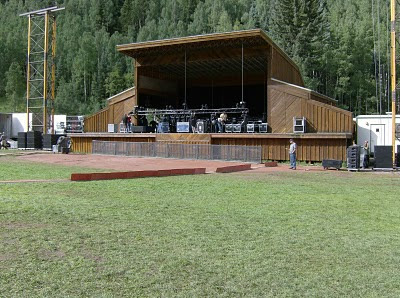 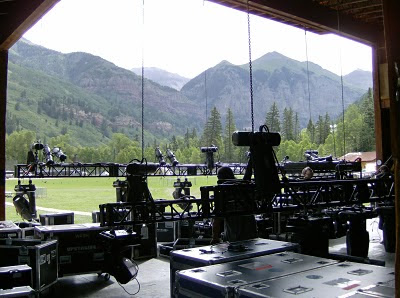 Tomorrow evening all the PayPal links for purchase will come down so I can prepare for Deer Creek. If there is something you had your eye on, you may want to grab it now...especially if you are not going to Deer Creek. Check out the links on the right hand side of the page.

The last batch of shirts will arrive to me tomorrow, so if you are waiting on a shirt (Tweezer, Reba, Kuroda) it will be mailed to you on the 11th. All other shirts will be coming to the shows with me. I will have a limited amount of Tweezer Madness shirts available at Deer Creek. After that...watch the blog for updates on another run of those, and also of the Whalecallers shirt.
Posted by Jiggs at 9:35 AM No comments:

More Shirts On the Way

Those that were asking for larger sizes (M, L, XL, XXL) in both the Reba and the Kuroda shirts can put in their orders now for stock that is on the way to me. Links are on the right hand side of the page.  The box should arrive on August 10th, and I can get anything you order sent out the morning of the 11th.

The rest will be coming with me to Deer Creek, but of course I can't save anything for you there, so the only way to reserve your preferred size is to grab it now.

Also...I am working on another run of the Whallecallers. Again, thank you for all of the requests. I will let you guys know when those are done as well.
Posted by Jiggs at 10:49 AM No comments:

For a limited time, all remaining ladies sizes are just $10. Yup. That's right. 10 bucks, no shipping charges. The Gildan ladies shirts I use are the 2000L style: